I hope you all like it when I get pissed off about this show, because I definitely do this week! The episode opens with Balki dancing and singing “Freeway of Love” while shining his shoes. So here we have a definite difference between the 1st and 2nd seasons we can point to:

First season: Balki sang songs related to the situation, even if only by one word

Second season: Balki sings songs because the writers know they don’t have to actually write jokes to get laughs Larry comes in bragging about how many times he’s going to get to touch Bonnie Kleinschmidt’s boobs. Larry hangs his coat. Remember this. This is important.

Bonnie Kleinschmidt is fourth runner-up in the Miss Chicago beauty contest, and as is typical when one’s self-esteem is threatened, it can be useful to engage in what’s referred to in psychology textbooks as “downward social comparison”.  If you gather around yourself those who are obviously less than you, it becomes easier for you to see the good qualities you still can lay claim to. It also helps if you can find a loser with tickets to the Bruce Springsteen concert. But Larry’s ego needs food badly, so he manages to spin this into a full-fledged fantasy where even Bruce is impressed that, out of the roughly 150,000 women in Chicago, Larry managed to find the one who wouldn’t refuse to be seen with him in public.  Before Balki introduces the plot element that will make sure we never, ever see Bonnie, much less hear her speak, I want to point out something I didn’t notice the past couple of weeks: that Larry managed to get the exact same lamp that they broke playing baseball.  That’s one of the perqs of working at a discount store that has 50 of everything and nothing ever sells. Balki, of course, has to ask “What germs is?”, because they’d only just two years ago stopped trepanning on Mypos, and that was because their drill broke.  And if Larry is so worried about germs, why doesn’t the bombshell that germ theory hasn’t made it Mypos not dial Larry up to 11 on the freak-out scale?  It only took me a few seconds to realize that Balki probably wipes with his hands, and Larry only didn’t realize it this long because Balki has been using the toilet paper to make funny hats. Balki pokes some gentle fun at Larry, asking if the invisible creatures called “germs” have a leader.  I’ll take misinformed but rightly skeptical Balki over Balki the Kid any day.  Larry recounts all the important events that germs have ruined for him throughout his life: his sixth-grade graduation, the spelling bee, and his junior prom.  On the one hand, Larry, I get you. When I grew up, I almost never got to watch the Saturday morning cartoons that would play on CBS because of college football games, which invariably ran into overtime; I never got to see much more than the end credits of The Amazing Live Sea-Monkeys starring Howie Mandel. I have hated football in all its forms every since.  When something keeps messing with you, you learn to avoid it. Cousin Larry, I’m sorry you had to share antibodies with eight brothers and sisters, but you really aren’t doing your immune system any favors by only consuming soda, beer, lemonade, potato chips, crullers, and liquid antacid. Soon, Balki and Larry recap the first scene in the world’s largest hospital room.  Balki mistakes a bedpan for a “Mypos army helmet”, and I think we have made the first step on the path to Mypos becoming a precursor to Wackyland from Tiny Toon Adventures.  Also, this is the kind of joke that I’ve never really understood.  The joke is that bedpans should never be handled because of what they’re used for, because what they’re used for is yucky.  But they clean those things out, right? Larry and Curly screw around with the hospital bed while Moe suffers intense pain. Larry squats down to say hello, and here comes the money shot!

Oh no!  Larry’s lifelong dream of touching a boob is now at risk!  No wonder germs love you, Larry–you provide them a perfect delivery system!  Me, I would’ve talked to a doctor or something, because, you know, HOSPITAL. But Larry just up and runs away! …and is sick by the next morning, having somehow also decided not to mix some crushed up Benadryl into his bismol. He’s so sick that he sneezes his “Puff” cereal right out of the bowl. I can only think of one other shot like this, from the Garbage Pail Kids movie.


But I’d really like to know if there are more.  Seriously, if you know of other scenes in television and film where someone forcefully sneezes light, modular foodstuff out of its container, please say so in the comments. (Cocaine sneezes don’t count.) Anyway, Larry eats about a dozen oranges and takes equal amounts of vitamins A, B, C, and D because sure, that makes sense.  Balki brings him one of those big strings of garlic, Wolfsbane, and pumpkin mold because, you know, FOREIGN.  I would seriously advise against eating a whole bulb of garlic, by the way; your farts will smell like garlic for at least a couple days.

Larry does that stupid thing where he asks about the pumpkin mold using the wrong question (“what” instead of “why”) so Balki can explain something for yuks.  Balki offers to cook Larry a “secret Mypos cure”, but Larry’s not having it. In the process of Larry ridiculing long-disproven medical cures and other pseudoscience, we learn some other facts about Mypos: only the Mypos royal family has indoor plumbing, the island has one phone, and “the foremost spectator sport is spitting for distance”. Larry tells Balki to shove his secret cure, and good on ya, Larry. Larry then tries to swallow his pills without water because, you know, PHYSICAL COMEDY. And I assume this is also to indicate that modern medicine only gets you so far. SUBTLETY. Later, Cousin Larry’s under a blanket, using a vaporizer. I had one of those!   I’m really not sure what tension there’s supposed to be for me at this point.  Am I supposed to hope that Larry will actually make it to the date?  This has become like when I watched too much Scooby-Doo or Matlock in a short amount of time, and I could tell who the bad guy was going to be without even putting the clues together.  I know Larry’s not going on a date because they’ve already used their third location.  The show keeps toying around with where it sticks its third location; this time around, they’ve shot their wad too early and have nothing left for the date.  Larry, sensing this, is ready to call it quits. Balki pushes the secret Mypos cure again, and Larry makes a valid point that curing a cold in 20 minutes goes against 200 years of medical research.  Angry Balki shows up and threatens to flush the stuff down the toilet. (Whew! I’m relieved–at the very least he knows how to do one thing in the bathroom correctly.)  “Here’s your last chance” is a good salesman’s tactic, and it works on Larry. He demands the “Mypos cure”. And Balki just milks this moment for all that it’s worth, whipping out some righteous indignation at how Larry kept taking verbal potshots at his precious, holy, sheep-loving culture.  Larry may put Balki down without Balki knowing it, but Balki knows how to rub it in when somebody looks to him for help.

Larry: You’re gonna make this hard for me, aren’t you? Larry must simply say the magic words: “I believe”. Larry, you should never have given any ground, because now you’re being forced into further retreat.  First, you were willing to be a science agnostic and at least try out the cure. Now Balki’s getting you to agree to faith-based healing.  You gave him an inch, and now he’s your ruler, Cousin Larry. Oh man, we humans have been using this trick on God for years.  God just never learns! 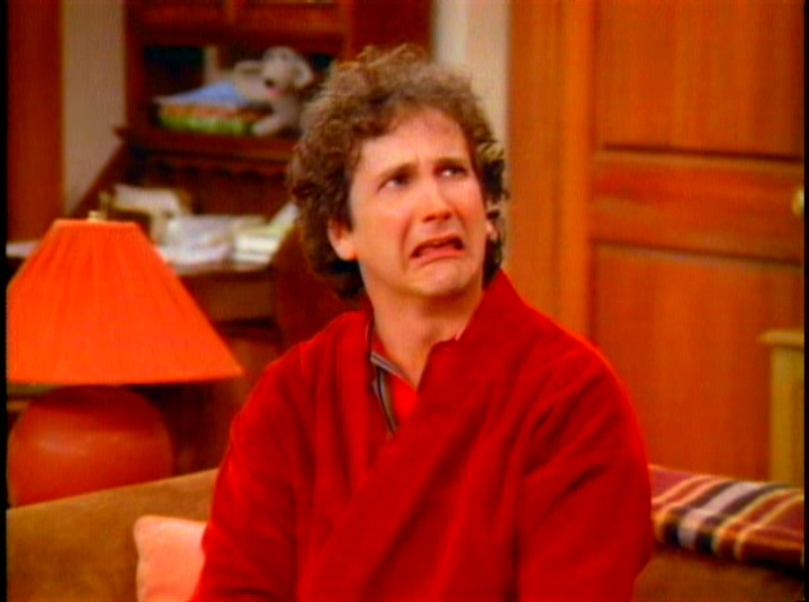 Ooh, yeah, that looks like bog water.  Glad I don’t live in a sitcom.  Larry asks if the cure has eye of newt or bats’ wings.

Instead, it’s “fish parts and herbs”.  Since there’s still a few minutes left in the episode, the twist here is that Larry was only supposed to drink a teaspoon, but downed the whole thing! Oh no!  Larry passes out and then sleeps for three days.  I guess he drank enough faith-based medicine to actually become Jesus! Larry realizes that Bonnie’s boobs will be forever out of his reach, and Balki sells the joke that he went out with Bonnie just by puffing out his chest.  For the second season of this show, with its repeated jokes, this is pretty damn subtle.  I don’t even mind too much that this nice moment was punctured by the follow-up jokes that 1) Bonnie ran off with a guy with front-row seats, and 2) Bruce Springsteen had the flu and didn’t even show. (I guess Bruce’s nose was… wait for it… born to run.)

And for the second time this season, Larry has to apologize for being at all upset with Balki after Balki forces him into a position where he might lose a chance at one of his own dreams. His lesson is that he shouldn’t have put Balki’s culture down because Balki had his best interests at heart. And holy shit is that a lesson that won’t transfer well to the real world.  Larry is further beaten down by the demands of being in a sitcom. Larry: Well, let’s not fight about it. I mean, you have your ways, and I have my ways

I won’t say who’s right, but I will say this: I know enough about anthropology to know that, if I really want to be serious about being a liberal, I need to be open to other culture’s ways of knowing and being.  There actually are legitimately happy tribal cultures in parts of the undeveloped world that put the rest of us to shame (I’m not kidding, go read Don’t Sleep, There Are Snakes if you’re curious).  But you don’t pick your own physical health as the starting point to being open to multiculturalism.  Sure, maybe by some chance the Myposian herb that looked like a nose happened to actually have some decongestant effect, but you’ve got to look at statistics.  When science has helped you out the majority of times you’ve looked to it for a particular fix, and you’ve got a hot date on the line, you don’t drink the fish parts. If you’re dying, sure, drink the fish parts.  You might point out that, 30 years later, Larry’s cures are no longer considered best practices for what to do when you get a cold: oranges are really more of a preventative measure, and vitamins had some serious shade thrown on them back in December 2013 (not to mention fish parts gaining some serious social cachet in recent years). But it’s the principle of the thing.

Okay, so we’ve got two episodes this season already that seriously pissed me off, which isn’t a great ratio. Let’s all just keep our chins up and remind ourselves that sitcoms like this often had different writers every week.

So let’s hope that we’re bound for better days next week when I review “Falling in Love Is…”.

I also hope that you’re all as lazy as I am and haven’t thrown your jack-o-lanterns out yet–you gotta save that pumpkin mold for cold season!

P.S. Okay, so maaaaybe there’s a connection between Aretha Franklin’s “Freeway of Love” and Bruce Springsteen, in terms of the sexual metaphor of a pink Cadillac; as well as the song featuring a member of Springsteen’s band. BUT IT’S STILL A FRICKIN’ STRETCH