I started the conversation last week about what this show’s goals are in its fourth season.  We’ve discovered a couple so far (to show how Larry’s insecurities make him susceptible to the predatory aspects of mass marketing; to be a shitty version of The Dick Van Dyke Show), but that can’t be all of them. Let’s see what new heights this week’s show reaches for, shall we?

Various recent research will give you different numbers on how much employees slack off during a 40-hour workweek.  1 hour, 2 hours, 10 hours… and one major factor is the age of the employee. But even without having grown up with the distraction of the internet, Larry and Balki manage to almost never be working when we see them in the basement of the Chicago Chronicle.  At Ritz Discount, there was an excuse for Balki to be sucking crumpled-up balls of paper into the vacuum: they barely had any customers.  But weren’t they both hired at the Chronicle because the paper was understaffed?

Here, they’re putting postage stamps on the bill payments they plan to mail in.  It’s something they shouldn’t even be spending paid time on to begin with, but what’s more impressive is how they’ve turned this one-person task into a two-person job. 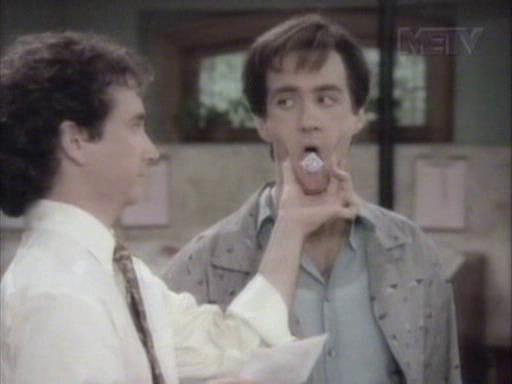 We do get insight into how Balki manages to be so efficient at his job as a mail clerk.  We saw three weeks ago how eager he was to be a willing part of the capitalist machine; he now makes the metaphor literal by turning himself into a stamp dispenser.

Lydia runs down the stairs exclaiming to the cousins just how excited she is.  Chuck Panama, the famous record producer, is coming to her apartment later that evening for the party she’s throwing. Lydia says that her lifelong dream has been to be a famous singer, ever since last season, when she couldn’t fulfill her lifelong dream of being a famous newspaper commercial actress.

Balki misunderstands the word “Grammy”, despite knowing the entire oeuvre of American music, and being a superfan of both Wayne Newton and Dolly Parton (she’d won 3 by that point).

Since the cousins are coming to her party, Lydia asks that they bring a piano so she can sing for Chuck. Larry claims his bad back procludes him from such strenuous lifting. 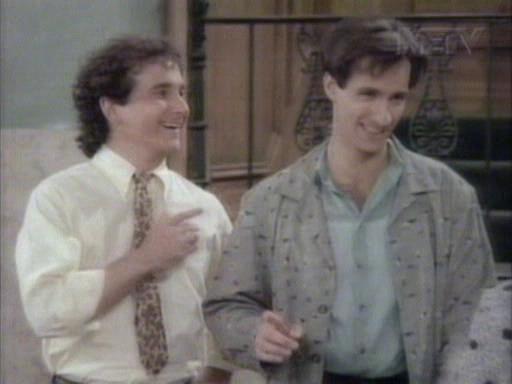 Balki says that he does all the work anyway and Larry tries to shush him, their private sex life not being a topic for the workplace.

Lydia rushes off, and Balki promises that Larry won’t have to work up a sweat, since they’ll be renting a truck. Then they just “yes I will”/”no you won’t” until the scene’s over. 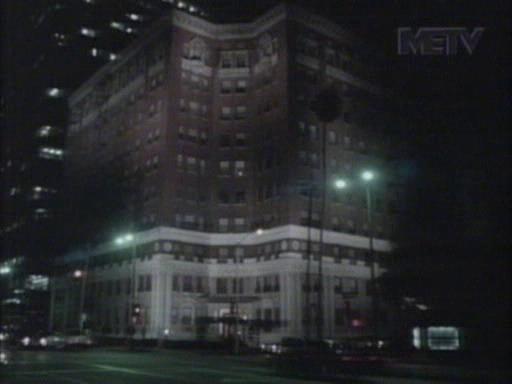 This season’s been sort of short on third locations so far, but it’s made up for here, at Lydia Towers, where we’re going to spend most of the rest of the episode.

Cousin Larry’s doing his “bring it on over here”/”swing it on in” bit again!  Somebody went back and watched old episodes! I wonder if they noticed that 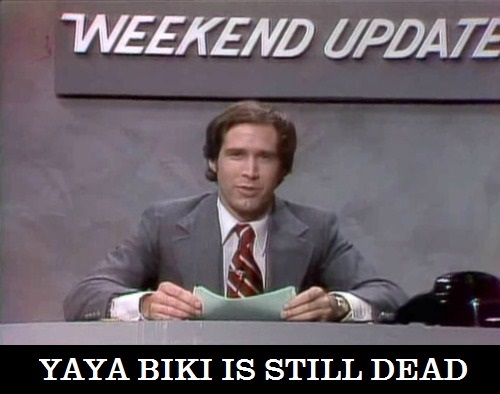 I know I sound like a broken record at this point, but I really am getting tired of how the show keeps trading on the idea that Balki is new to the country and doesn’t understand how things work.

But somehow, despite these guys having been sexual partners for over two years, Balki doesn’t understand the concept of diagonal entry.

Larry says it’s time for them to give up, but Balki is committed to helping a friend. That’s it–that’s the disagreement you get this week.  Larry says no, Balki says yes. That’s it.

Balki tries to make Larry jealous by going to work on the hot side of the key bed. In many episodes Larry’s a lyre, sometimes he tries to be the dominant. But this episode is in Lydian mode, and Larry says they’re going to need a plan to scale these steps. Balki doesn’t want a plan.

Balki: Just pick it up and go.

And then they repeat that line a bunch.

Larry says that the most common way people hurt themselves is by lifting heavy objects incorrectly. And despite all the times that Balki’s lifted Larry, Larry still thinks he needs to give his cousin some pointers.

I can always count on the fact that, about four or five episodes in, the show just gives me lots of good gay joke fodder.  After showing Balki the proper way to “lift the piano”, he tells Balki that they have to establish a good rhythm. 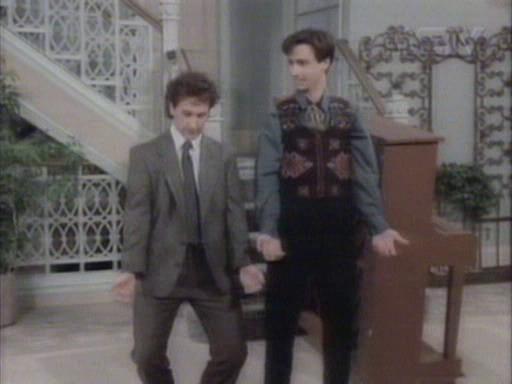 So Balki speaks reason #19 season 3-8 have about as much chance of coming out on DVD as the cousins do of getting the piano up the stairs: “I’ve Got Rhythm”. 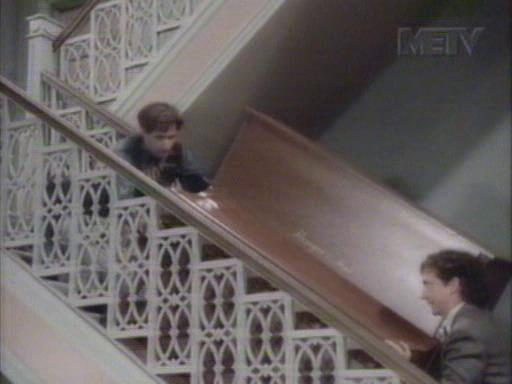 I’d like to say that Larry has become as Sisyphus, and that his neverending stream of lies and deceit has put him in this situation where it’s two steps forward, and then two steps back. But the only thing going on here is two guys pushing a piano.  No rock, no roll, no music at all.

Has any apartment building been laid out like this, with a closed door on each floor telling you what floor it is?

Anyway, there was an act break, which should mean that the story goes in some different (hopefully unexpected) direction, but. 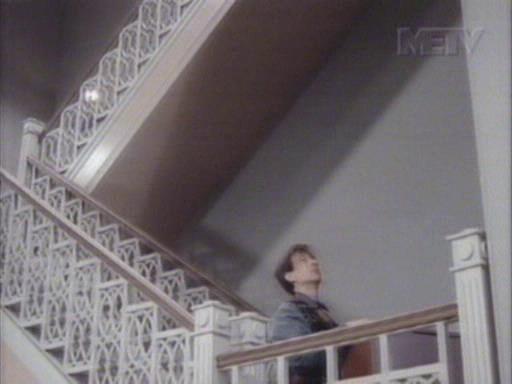 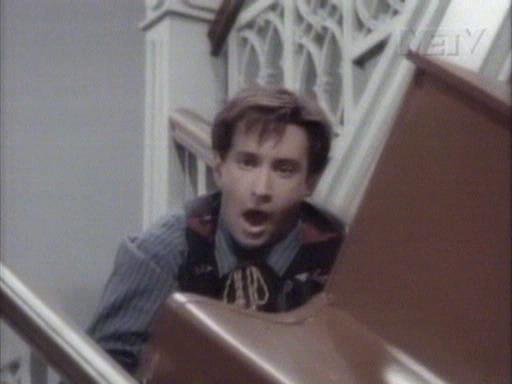 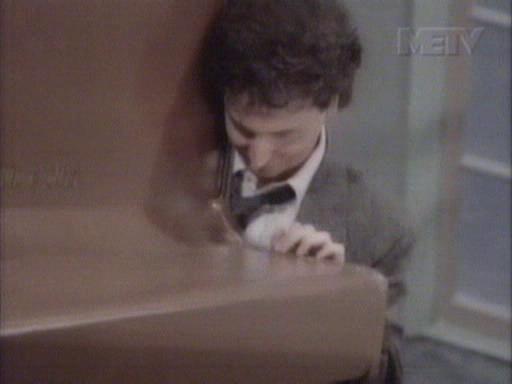 look, yes, that’s nice, I can make a balance rail pun, because that’s a piano thing, but– 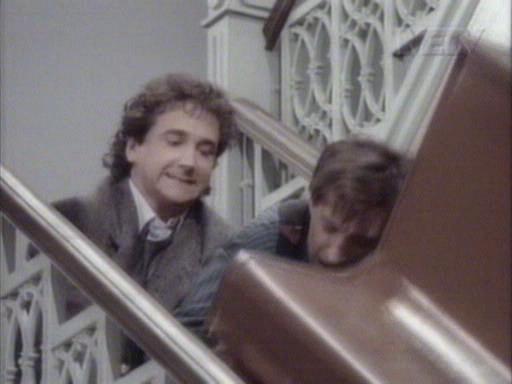 THIS IS A BAD IDEA 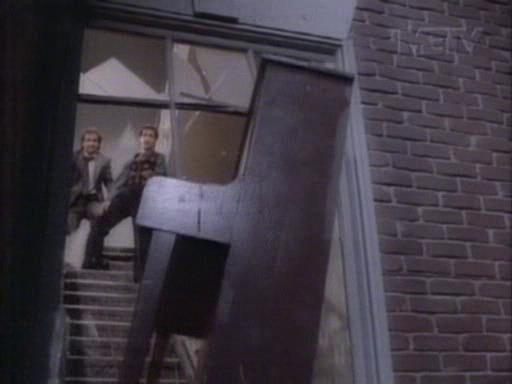 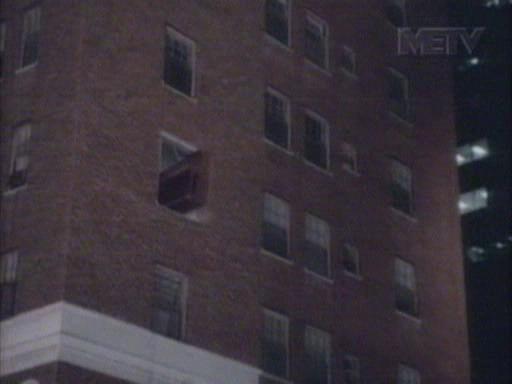 *FRANK lands on the piano*

In the next scene, they’ve arrived at the 10th floor, but the door is locked.  Larry claims that his back is fine, but I know better: that’s just the adrenaline. 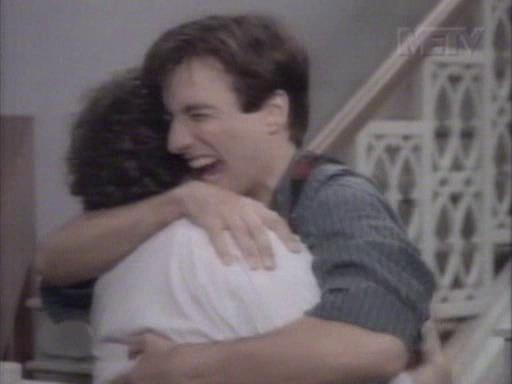 Balki says they’ll walk downstairs and go up in the elevator and open the door from the other side.  But Larry starts in whining about how his pants are ripped and he’s got a blister on his finger and he’s WET and he’s HYSTERICAL. His back gives out and he tries to walk down the stairs.

it’s called Larry staying up there while Balki goes down in the elevator!

Balki: I can’t carry the piano, Mr. Apple-ton. But I can carry you! 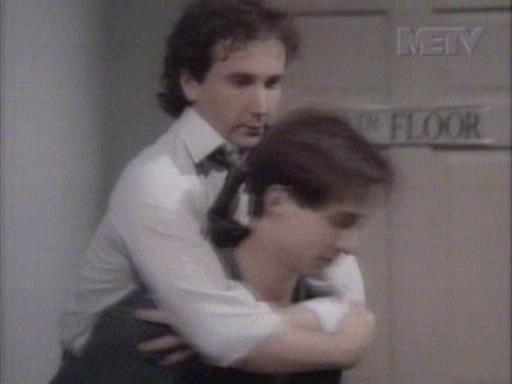 it’s called having a fucking plot! 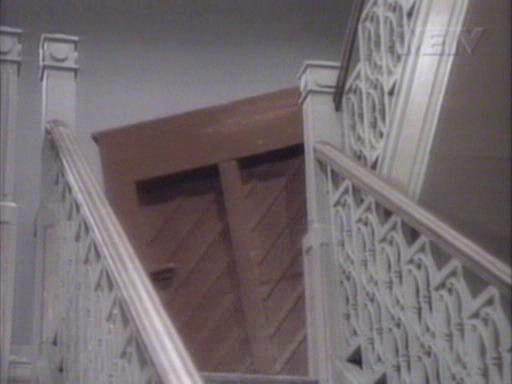 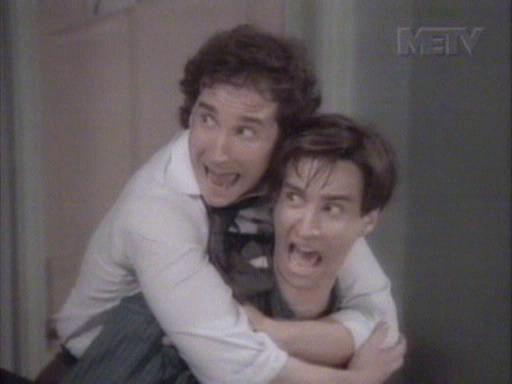 And even though we last saw the piano at an angle, it is now barrelling down the stairs and turning on its own on the landings. 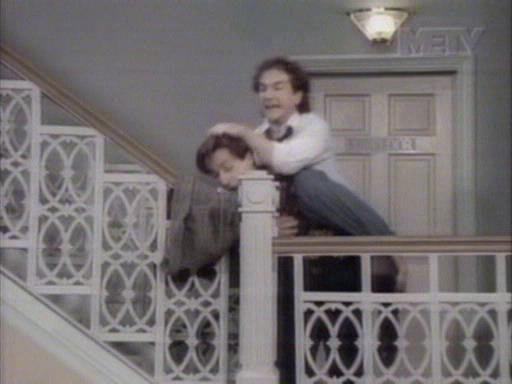 The cousins try to flee, but Balki hangs them up on the third floor to retrieve Larry’s coat.

The piano finally breaks another window and flies to its death, where it causes a 10-car pileup. Balki takes a moment to count the dead bodies. 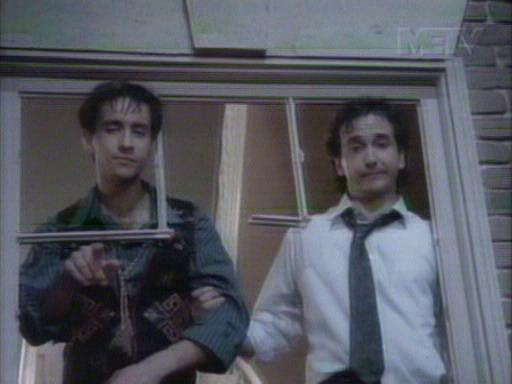 Lydia comes out of the elevator making out hard with Chuck Panama.  Everybody always thinks they sing well when they’re in the shower, but she got Chuck in there with her and he agreed.

Was, uh… was there anyone else at the party?  Lydia adds insult to injury when she tells the cousins that she didn’t need the piano anyway.

Lydia gives us reason #20 that seasons 3-8 have about as much chance of coming back as Chuck Panama does: “People”. 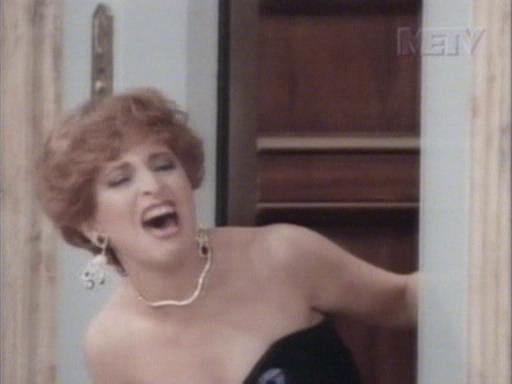 Balki says that this episode proves that Larry is a good guy because he was willing to help a friend. 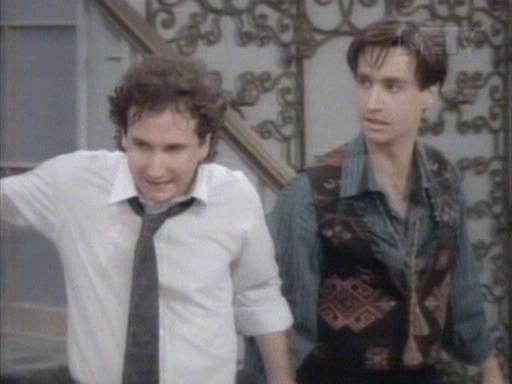 There are ideas that look good on paper but not in execution, but “Larry and Balki fail to get a piano upstairs” doesn’t even manage the former. Could we have gotten, I don’t know, the cousins having to go back down a flight to let an overweight person through? Could someone at the 10th floor have been so bombed on the party drug of their choice to have a funny misunderstanding and not let the cousins in?

It’s possible to have a good episode of television where the characters don’t achieve their goal, or where “nothing” happens; Seinfeld proved that with both “The Chinese Restaurant” and “The Parking Garage”. But what Seinfeld had going for it was that it was more than just two people grunting on opposite sides of a piano.  I mean, I guess I could have put some time and effort into some sort of tongue-in-cheek analysis of how this episode encapsulates the relationship between Balki and Larry. Maybe if I was more familiar with existentialist plays, I could have done a bit around that. But this episode provided me almost nothing to engage with.

There’s an exchange between the cousins that approximates how I feel about the episode.

Balki: You hurt yourself doing something good for somebody else. God will smile on you.

Larry: That’s what I did this for? A smile?

Was it worth it for me to watch this episode and write about it? Did you laugh? Did you even smile?

I sure fucking didn’t.

I started this review hoping to see what goals this show had, what I should measure it by.  But if this episode is any indication, it’s set the bar pretty low for season 4. Shit, those barely even read as music puns, but I don’t give enough of a shit to come up with a third one.  Shape notes, arpeggio, tuning hammer, who cares.

Next week is some episode called “High Society”. Whatever.